The Benefits of Crafting… 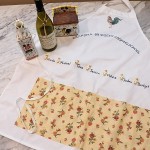 This past week’s Parade Magazine had an article on the benefits of crafting and how it is making a comeback in this country.  More than half of U.S. households take part in at least one crafting activity such as canning, scrapbooking, and sewing.  The article said that some reasons for this rise in making homemade goods relates to people trying to slow down the pace of modern life, people desiring to learn skills passed down from their grandparents and the sense of accomplishment and the pleasure of creating things.  The article spoke of a gentleman that after an extended illness found that he had difficulty concentrating.  His therapist recommended a meditative hobby such as knitting.  He found that knitting calmed his hyperactive mind and people would ask him where he got his hat and scarves.  He started selling them and it became so lucrative that he quit his job and now enjoys his craft full time.

I think there are a lot of us that are trying to slow down the pace of modern life, I know I am.  As a parent, it is always a struggle trying to balance enough extracurricular activities for our daughter and making sure her grades don’t suffer as a result.  Today there are so many choices for kids and so many levels of sports competition.  When I was a kid, if the late bus couldn’t bring you home, you didn’t play the sport or join the club, period.  Because kids have not developed coping mechanisms and a governor on their emotions they feel they need to respond to everything, now.  It is important for us to protect them and slow down the hectic pace and onslaught of information coming at children today.  As a small business owner the pressure to do well is with you 24/7 and that isn’t good for anyone.  Taking time off seems a luxury and you are always thinking what else could I be doing to be more successful.  Crafting is a very effective way for everyone to let a bit of steam out of the kettle; a mini-vacation from your daily routine.

Regarding the desire to learn skills passed down from grandparents, I wished I had asked mine about wine making.  I vividly remember my grandfather after the grapes arrived from California.  He would call his children and say it’s time to make the wine.  All of us grandchildren had the task to strip the grapes off the vines and then the men would dump them into the wine press to crush the grapes for the first juice.  Growing up, there was never a bottle of bought wine in my grandparents’ home.  It was always a bottle from the barrels in my grandparents’ fruit cellar.

The benefits of crafting are numerous.  Nurses have observed that those patients that participate in an arts and craft program require less pain medication.  Experts tell us not to consider finding time for crafts as self-indulgence, but rather to consider it as a medical necessity like a medication that you need to take for optimal benefit says, Robert Reiner, PhD, a New York University psychologist that studied the health benefits of crafting.  Trying new things and being creative promotes brain flexibility and growth.  My favorite part of crafting is that there is a piece of the person within it, moments of time spent in the creation, and a representation of effort that was completed.  When I receive a homemade gift, I treasure it for everything it represents.

This entry was posted in Therapeutic Communication - Food. Bookmark the permalink.

3 Responses to The Benefits of Crafting…