Posted on November 14, 2018 by Michelle Podlesni 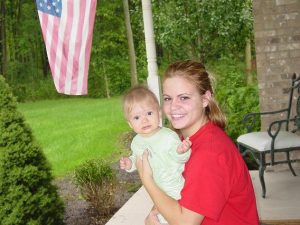 Our society used to be a front porch community. People congregated on their front porches. On a swing, a glider, or on the stoop steps leading up to the front door, folks watched what was going on in their neighborhoods and street. New living conditions, forms of work, new technologies, and the decline of the extended family, are contributing to what noted psychologist, Pierro Ferrucci calls the Ice Age of the heart. In his beautiful book, The Power of Kindness, he explores many surprising facets of kindness and argues that this trait will not only lead to our own happiness, but the happiness of those around us and thereby, the world. Kindness really does have the power to transform.

I reread his book each November in honor of National Family Caregiver’s Month. Many caregivers are involved in family care giving at times. Sons and daughters find themselves in roles that they never anticipated or trained for. We found ourselves as part of the Sandwich Generation, caring for an aging parent while supporting our own child. This was in addition to owning a senior care company. In fact, of the sixty caregivers we had on staff, over a third were also family caregivers. Kindness and compassion were essential traits we looked for when hiring caregivers. Many times it wasn’t the task that was appreciated as much as it was the tone of voice, the warmth extended and the compassionate care. We honored our caregivers with awards during the month of November and everyone was involved in selecting the caregiver of the month. One of the winners of this award, helped care for my own mother when she was in need of assistance. Shirley was in her late sixties and knew exactly how to handle my independent mother while preserving her dignity.

I remember an elderly client (we’ll call her Mrs. Buick), that was really a curmudgeon. She just was tough, tough, tough so instead of allowing our caregivers to deal with her, I would usually take her assignments. Well, she ended up being admitted to the hospital for some tests and she wanted me to go get her a manicure set. I better get it at the dollar store too and not spend her money foolishly. I did go to the dollar store for the set but I also picked up some nice hand lotion and nail polish and a little plastic tray. When I got back to the hospital, there she was waiting to fuss. I ran warm water in the plastic tray, placed it on her bedside table and said I was going to give her manicure. She sputtered that wasn’t necessary but I told her I would love to do this. As I held her hands, first in warm water and then massaging lotion on them, it wasn’t just her hands that softened. She started telling me how she used to care for hands and nails much better when her husband was living. He loved her pretty hands. She told me about her son and how it broke her heart when he married and moved so far from home. Before we knew it, her hands looked refreshed with beautiful pink polish. She asked me how did I know to pick her favorite shade of pink? We provided care giving services for Mrs. Buick for another year before she ended up moving near her son. I missed her, her gruffness, and her sweetness and the pretty pink nail polish she continued to wear.

Getting back to the front porch and how it used to be, I think of Veteran’s Day and remember a story my father’s family told. After being away four years in WWII in some of the most intense battles of the war, my father did not tell his parents when he was arriving home. He said he would just walk by the front porch of the house because he knew someone would be there to see him. It happened to be his kid brother Louie, lounging on the glider that heard a guy say “Hey kid, why don’t you go buy your brother some ice cream”.

This entry was posted in North Forty, Nurse Entrepreneur. Bookmark the permalink.