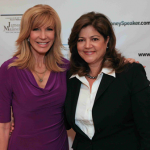 I was a mom on a mission and that mission was accomplished! Let me explain, as president of the National Nurses in Business Association I encourage nurses to step up and step out of their comfort zones to take their careers to the next level. For more people to know about you and the wonderful work you are doing you need to get out there, share and network. This was a time when I needed to take my own advice. It all started when my daughter saw an invitation I received to an event in Los Angeles where Leeza Gibbons was scheduled to speak.

“Mom, you have to go, it’s Leeza Gibbons and you have to give her my letter”. As a family, we had watched the most recent season of Celebrity Apprentice and my daughter Bridget, predicted early on that Leeza would win. Strength, grace, professionalism and beauty; everyone loves Leeza. No sooner then I was going to respond that I didn’t think I could go, my daughter went to her room to write the letter.

I never should have read that letter…I thought as I made my way through southern California’s traffic on the way to the event. Leeza was being interviewed by James Malinchak and I could have listened to her speak all day; she is amazing! I couldn’t wait to get a copy of her book, Take 2. After Leeza spoke, we had an opportunity to meet her and have a picture snapped. You had about 5-10 seconds for this and then Security would come up and usher you away because there were many people in line. I can’t remember when I was so nervous or so worried about something. I knew that whatever came out of my mouth had to be concise and compelling and that there wasn’t going to be a second chance to get my daughter’s message to Leeza.

“You are my 12 year old daughter’s hero and she insisted that I give you this letter she wrote” I said as Leeza took the letter from my hands and actually started to read it! Security was not happy, however Leeza was and she told her staff to make sure nothing happened to that letter and to place it with her things. It was then I could exhale and we had the above picture snapped. Then Leeza said “Good job Mom” and I’ll tell you, it was one of the greatest compliments I have ever received.

Even better, Bridget received a personal email from Leeza after the event discussing some of the content from Bridget’s letter. I was so happy for my daughter and the fact that she took a chance and wrote a very heartfelt letter (about her Nana’s Alzheimer’s) to her role model. [As an update, Leeza used her earnings from Celebrity Apprentice to build a new Care Connection in South Carolina http://www.leezascareconnection.org/leezas-care-connection-at-the-mungo-house/ honoring her family’s journey with Alzheimer’s and providing services trying to make families lives easier in dealing with Alzheimer’s.]

I wrote this post now because it is a new year and I want to encourage you to take that chance, do something that makes you nervous and trust that you can do it. When we step up and step out the outcome is sometimes so much more than we ever realized. Don’t miss the opportunity.

Share :
This entry was posted in Nurse Entrepreneur. Bookmark the permalink.