Lunch with Joe Theismann, what a way to start football season… 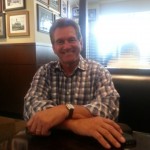 I attended James Malichak’s Speaker Success Boot Camp this past week.  As someone that literally went to boot camp, I can tell you that when it ended the feeling was similar to getting out of boot camp in the Navy.  I felt exhilarated, motivated and exhausted!  While being seated for lunch on Saturday, I saw that Joe Theismannn, the legendary NFL quarterback, was seated in the booth behind me.  I knew that he was the celebrity speaker scheduled later that evening and here he was sitting right behind me eating lunch.  Those of you that know me know that I am from a small western Pennsylvania town known for steel and football so to say I was excited to see Joe is an understatement!

As I am getting settled I find myself looking through my purse for my compact mirror to see if I can hold it in a position to see Joe.  Then I start laughing; a lot… and get up to go over to him.  I said “Joe, did you ever see the I Love Lucy episode where she is having lunch at the Brown Derby and William Holden is sitting behind her?”  Joe started smiling and nodding his head saying “Yes.”  I told him I just had to come over and say hello and that I was looking forward to his speech later that evening.  While reaching to shake my hand Joe said, “Michelle, I’m glad you came over to introduce yourself.”  I politely returned to my booth smiling from ear to ear.  Just before my food arrived, a large shadow on my right made me look up with my Lucy eyes to see Joe and he asked if he could join me.

Now I am telling you inside I am shaking but outwardly I tried to remain calm and replied “Of course.”  He proceeded to ask me questions about why I was attending the event.  I told him that I thought James was the best marketer and businessman I knew and I wanted to make sure my book business was on track.  We had a nice conversation and then he left saying that he would let me get to my lunch which had just arrived. 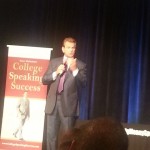 If you ever have an opportunity to hear Joe Thiesmann speak, please take it.  His speech was one of the most inspiring, motivational and endearing speeches I have ever heard.  They say that you need to eat a meal with a person before you can really know them so this is what I know about Joe Theismann.  Observant, he noticed my badge and called me by name; attentive, he looked in my eyes while speaking with me; student first, he demonstrated the joy of learning and discovery and excellence clearly evident by his habits, discipline and results.

Thank goodness for re-runs of I Love Lucy; Lucille Ball’s humor allowed me to step out of my comfort zone and turn around.

Share :
This entry was posted in Nurse Entrepreneur. Bookmark the permalink.